What a mysterious marine life discovery it was last week while scuba diving at Crystal bay, Nusa Lembongan Penida. Or at least that is what we thought. Like you, we didn’t know what we saw. We posted it on our facebook page and put the awesome video on our youtube channel to get more information about this mysterious discovery. Some people thought it would be Mola Mola babies. After some more research among friends and marine biologist friends we can finally say: The thing our senior Divemaster Dudi and his group saw is called a Salp! A true mysterious marine life discovery for us.

What is a Salp or the mysterious sea monster?!

A salp (plural salps) or salpa (plural salpae or salpas is thanks to Wikipedia explained as a barrel-shaped, planktonic tunicate. The mysterious marine life Salp or Salps or Salpa are invertebrates; this means they do not have a spinal cord. The mysterious Salp live in cold oceans, coastal waters for their whole life span.
It moves by contracting, thus pumping water through its gelatinous body. You can compare it to jet propulsion! Basically a powerful forward movement produced by forcing gases backwards, as in a jet engine! And that way of movement of the Salp is one of the most efficient in the animal kingdom. How cool is that for our mysterious marine life discovery with Scuba Center Asia, just diving at one of the top 5 dive locations of Indonesia!

What does the mysterious Salp eat?

Some say the mysterious Salp is also known as the ocean vacuum cleaner. The salp strains the pumped water through its internal feeding filters, feeding on the tiny phytoplankton. Phytoplankton is microscopic marine algae and gets their energy directly from the sun using photosynthesis, like plants. Zooplankton then feed on phytoplankton and is then eaten by larger zooplankton, fish and so on. Basically the mysterious Salp has the same diet and lunch menu as our mysterious Manta Rays!

The reason the mysterious Salp or Salps or Salpa is so mysterious is just because! 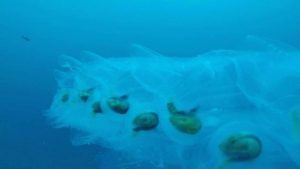 The chain of Salps as you can see on the picture and or video is called the “aggregate” stage, after it leaves the parent. The photo shows how they are attached, one to the other. The row of spots or things you see that look like a baby something is the stomachs of the Salps. Each of the clone animals in each chain will then have a single baby of its own, grown from a fertilized egg, attached to its mother’s inside and nourished by the mother. After a while these babies grow large and are born, leaving their mothers to swim freely in the sea. But by this time, the mothers are already turning into males, and fertilize other salp eggs. When the single babies are fully grown, they will make long chains of cloned babies, just like their grandparents did.

A fully grown Salp can be of 15 cm long.