Should Divers be Scared of Sharks

Sharks have been known as scary predators that cold bloodedly kill whatever creature they see. We even created movies that went viral about this, which scare people even more. Sharks dominate the ocean’s food chain, making them an apex predator. As scavengers, sharks adapt to their environment quickly and able to eat whatever available in the ocean. Once their food source become scarce, they can easily move on to another food preference. Hunting food is easy for them, as they can use their electrochemical receptors on their snout to detect water vibrations. Selecting prey is one simple task.

Do we divers need to be scared of sharks? Before we answer this question, you need to know sharks’ behavior and dig in deeper on the reasons why we are scared of them. 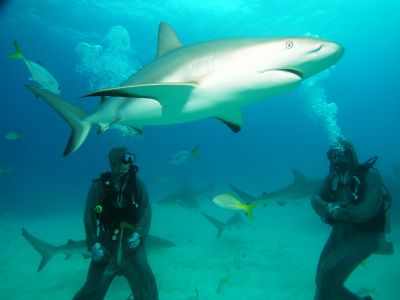 Shark has an important role in terms balancing the ecosystem. It managed underwater population by culling out the sick from the healthy. Divers tried to compare a shark to a cat to understand their behavior. Turns out, shark’s hunting style is similar to cat when chasing a mouse. Shark will circle around its prey and then using speed and agility to catch it. Why is this finding important? Because by studying how shark attacks its prey, we understand what draws its attention. One example is sea-lion. You will see this animal being super playful in the water moments before sharks make a move and attack. The playfulness of sea-lion draws shark’s attention. The same thing goes for divers, surfers and other humans playing in the ocean. Splashes of water and other movements are inviting cues. The curiosity of this animal makes it come closer to learn what is happening.

In 2015, the Australian Shark Attack File showed that injuries and fatalities caused by shark attacks were lower than deaths or injuries caused by activities in the ocean. Do you know that coconuts falling out of trees killed more people than shark attack does? Movie, stereotypes and how media phrase this event created bad judgement to this animal. In fact, if sharks can speak, they will fear humans even more than humans fear them. Why? Humans have killed sharks for profit. Selling shark finning for natural medicine and the meat as well.

This is not by all means to make you think that Shark will never bite you. A cat will still hunt for mouse, and so does shark in order to live. You still have to be cautious when you dive, but you don’t have to hate this animal just because what you see on the media.