The History of Scuba Equipment

Hayooo lovely people! My name is Vanessa. I am currently a Divemaster candidate at Scuba Center Asia, here in Nusa Lembongan, a small island in the South East of Bali. Scuba Center Asia is based at Mushroom beach and owned by a Dutch couple Kim and Bastian. Half a year ago, I did my Advanced Open Water course with them. And since it’s such a cool place to be, I decided to come back and do my PADI Divemaster course. So during two full months, I spend more hours below than above the water! How nice is that, right?!

Why this topic about the development of scuba equipment

So one of my duties as a Divemaster is to arrange the logistics like the dive equipment for the guests early in the morning before diving. There was one morning I was standing in the equipment room as usual, I stared at all that dive equipment and I was thinking about the history of the scuba equipment.

In Scuba Center Asia we are lucky to have the latest up to date gear – most are not even older than three years! That fact got me wondering about scuba equipment and how they actually got developed. How it might have looked like at the very beginning. And who even came up with the idea to stay underwater for more than one breath. So many questions! 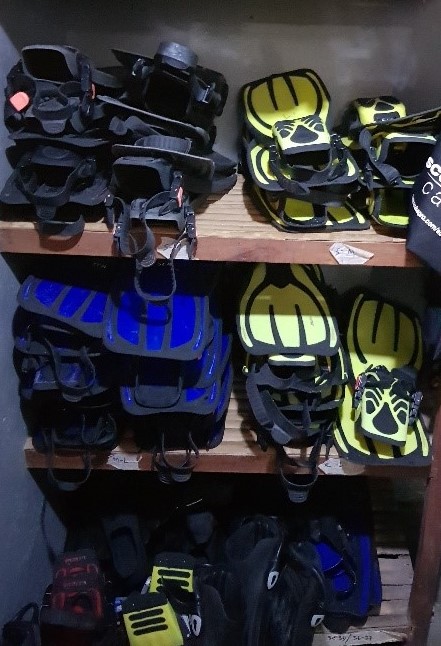 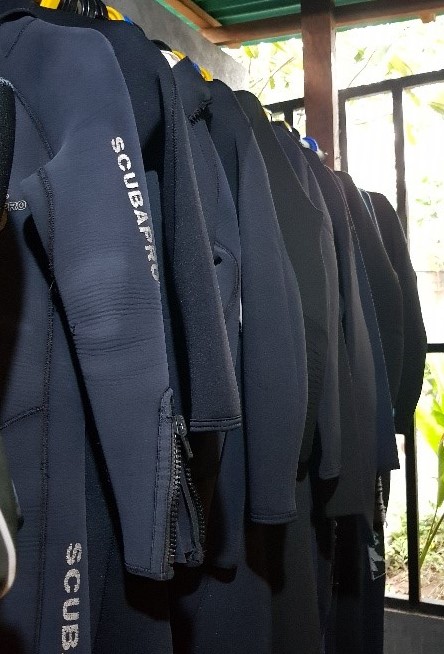 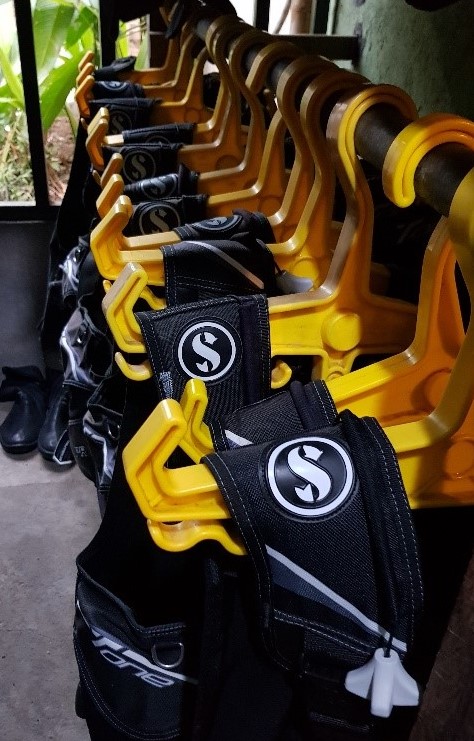 I got excited to learn more about that, so I started a little research. I found some pretty amazing facts that I’d like to share with you.

The history of scuba diving

The history of diving goes way back to the dawn of human existence. People have always been fascinated with the idea of being able to breathe underwater. But the first reason for them to actually enter the water was to catch food from the Ocean. Later they started to collect treasures such as corals, sponges or shells to sell them. Over time, the potential for underwater exploration, construction, and military use became obvious. So people started to look for ways to stay underwater longer but also deeper. We have come a long way since then.

The Scuba diving we know today is developed over hundreds of years of innovation and research. Based on technical aspects but also based upon the physiological perspective. A great example of that is the research on the effects of underwater pressure on the human body. A lot of effort also put into creating standardized training programs for amateur and professional divers such as PADI, CMAS, NAUI, to name a few. So thanks for all the contributions of many great minds throughout the centuries. They helped to evolve diving from simple skin-diving to a more sophisticated form of these days:  Scuba Diving. 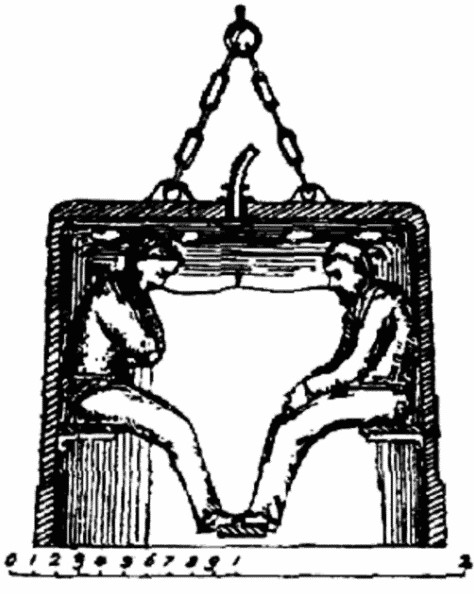 So let’s jump back to the very beginning of diving. The first snorkels were used by ancient swimmers. Hollow reeds allowed them to breathe underwater. There is a popular legend of a Greek sculptor named Scyllis. He got jailed on a Persian ship during the Greek’s war against Persia in 500 b.c. He could escape and swam nine miles with the help of a hollow reed as a snorkel. In the 4th century, interests in underwater work and exploration grew fast. The main reason for that is the military use during the wars at that time. So the people started to develop suitable equipment. The diving bell is one of the earliest types of equipment for underwater exploration. Its use was first described in the 4th century by the Greek philosopher, Aristoteles. The prototype of a dive bell was an overturned cauldron. They were forced into the water so that the air got sealed by the water pressure. Like that the diving bell retained usable air for the diver, but only for a very short period of time. Later, in the 16th century, a similar technique appeared again. Bigger wooden barrels, open at the bottom, replaced the cauldrons. These barrels were held stationary, a few centimeters above the bottom. So the diver could stand and have his head inside the airspace. This allowed him to leave the barrel for one or two minutes to explore and get back to get fresh air. The bigger space of a barrel increased the dive time but also the flexibility of the diver. Until the air in the bell was not usable anymore, he could go forth and back to explore. 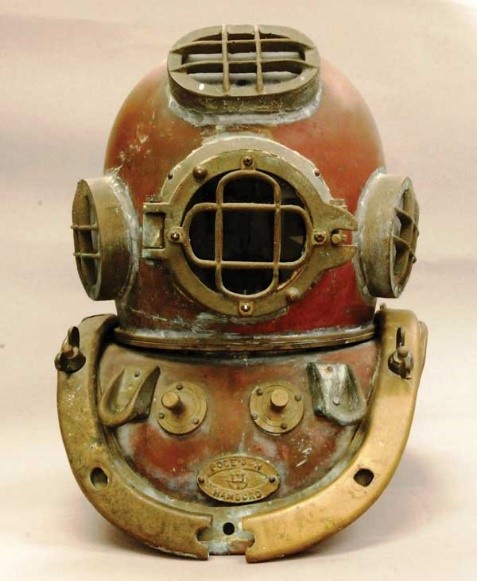 Later in the 16th century, England and France started to construct even more withstand helmets. Made out of metal, they could withstand even greater water pressure on deeper dives. With a hose, the helmets were connected to a manual pump on the surface. To provide the diver with air, they started to pump down air. Since dives got deeper, the temperatures started to decrease. Better protection against low temperature became necessary. A great material available at that time was leather. So full diving suits made of leather became popular.

In 1772 a French guy, Sieur Freminent, invented the very first rebreathing device.  The idea behind his invention was to be independent and flexible underwater. The device supposed to convert the exhaled carbon dioxide into Oxygen and allow the diver to further increase the dive time. But the lack of appropriate knowledge at that time led to the inventor’s death. He died after twenty minutes of testing his device. The reason was a simple lack of oxygen. About a hundred years later, a similar machine got developed. An English guy, Henry Fleuss, followed the same goals. But instead of compressed air, he used compressed oxygen.

With the knowledge of today we know, this idea was predestined to turn out fatal. Pure oxygen gets toxic under the pressure of water.

After these two horrible dive accidents, it was time to get more into detail. Scientists started intensive researches. They tried to find out, what exactly happens within a human body while diving.  Especially two men named Paul Bert and John Scott Haldane affected modern research a lot. Due to their great minds, scuba diving reached a whole new level. Their studies helped explain the effects of water pressure on the human body. Furthermore, they explained the effects of oxygen and nitrogen under pressure. And they also defined safe limits for compressed air diving. Based on that new knowledge, modern dive equipment could get developed.

In 1925 Yves Le Prieur and Maurice Fernez designed the first open circuit Scuba system.  The two men used cylinders, filled with three liters of compressed air, to replace the surface supply. All previous inventions had relied upon that support. So this revolution offered divers a whole new freedom. The cylinders were connected to a regulator that supplied continuous flowing air. For many years that was the system used for diving.  The concept of a demand valve was first patented by Benoit Rouquayrol from France. So far it was only used for smokey rooms or poisonous mines and not yet for diving. 1864, the French Navy lieutenant, Auguste Denayrouuze adapted that concept for underwater use. The demand valve sets the starting point for the Scuba Regulator, we know today.

In 1933 another Frenchman, Louis de Corlieu patented the first scuba fins. So by this time, all the basic Elements for Scuba diving were in place for a big revolution. In 1943, Jacques-Yves Cousteau and Emile Gagnan changed Scuba diving forever. They introduced “The Aqualung”. That was a regulator system that combined two previous systems. The autonomy of the Le Prieur “air supply system” and an improved version of the Rouquayrol “demand Regulator”. Due to these guys, the underwater breathing apparatus became accessible to the masses. The recreational Scuba diving was born.

In 1952, Australian Ted Eldred refined the regulator design from twin hoses to a single hose. He also changed the system from a one to a two-stage system. So the regulator could deliver air at the same pressure as the water around the mouthpiece. From then on, the improvement, refinement and streamlining of scuba equipment developed fast. So did the sport’s popularity.

The first version of the buoyancy control device appeared on the market in the 1960s. It was a form of a jacket, inflated by a separate cylinder. In 1971 Scubapro improved on this design by adding an inflator hose to the regulator first stage. This allowed divers to control their buoyancy using air from their cylinder. The equipment material and the design we use today differ slightly for sure. But when it comes down to mechanics, they work pretty much the same as at its very beginning.

The History of Scuba Equipment: How cool 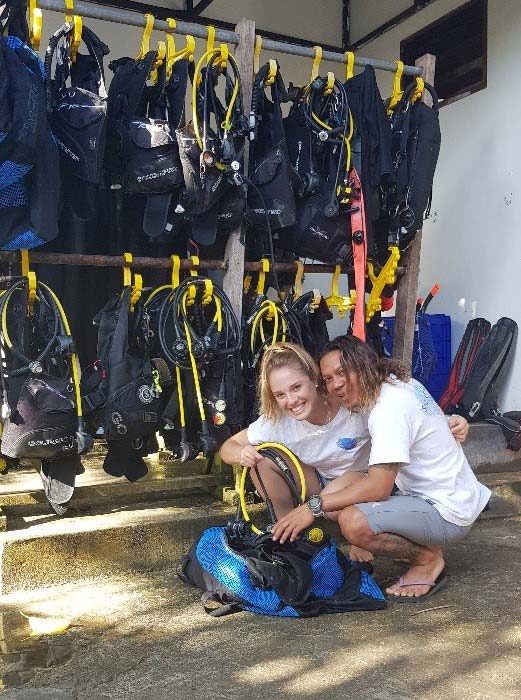 Instructor Juli and me

Wow, entering the material room a few days later was pretty cool. After my little research, my view of my equipment changed a lot. That morning I took my time to have a closer look at the scuba equipment of Scuba Center Asia. All the stories I read about the past rushed through my head. I can’t imagine diving the way they did hundreds of years ago. I’m very grateful for all the work and effort that had to be invested to let me dive the way I do today. And I’m super excited to where further research of scuba diving and scuba equipment may lead us in the future.

Next step for me is to have all my own scuba equipment! My own mask, check!

My own wetsuit, check!

My own computer, check!

My own fins and booties, check!

My own regulator, almost check! ?

My own BCD, almost check! ?

Cheers to this awesome adventure!